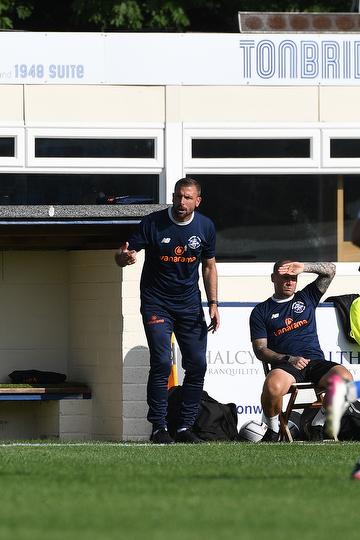 The Tonbridge boss looks ahead to the visit of Concord Rangers

Steve McKimm warned his Tonbridge Angels side to expect a reaction from Concord Rangers when the Canvey Island-based side visit Longmead on Saturday.

Concord have made an impressive start to the National League South season, but slipped to a 3-0 home defeat by Chippenham Town last time out.

“They’ve done extremely well,” said McKimm, commenting on the season so far for Chris Search’s men. “They had a turnover of players in the summer and a new management team came in. The players are obviously doing what the manager is asking them to do, because they’re picking up results. They had a bad result at home at the weekend, I’d say by their own admission, but they’ll look to bounce back and come and take points off us, so we’ve got to be extra careful and make sure we’re on our toes waiting for their onslaught.”

The Angels come into the clash on a four-match unbeaten run in the National League South, with last week’s 3-1 win over Dorking offering the best possible reaction following the heavy defeat to Hayes & Yeading in the FA Cup.

“It shows that they don’t dwell on things,” said McKimm. “As a management staff we don’t do that and we don’t allow the players to because it affects your next performance, so what had gone by the previous week had gone – couldn’t do anything about it. [We were] disappointed over the weekend but then we got back to it on Tuesday and Thursday, preparing for the Dorking game, and they produced the goods on that day.

“The staff I’ve got with me are so helpful. I couldn’t do it on my own. With their ideas and the planning that we put in place together, it stopped [Dorking’s] threats, it allowed the players to do what we needed to do and we got the points at the end of it. It’s one of those – I always tell the players to never get too high or too low.

“I will always praise them when they do well and I’ll let them know when they haven’t done well. There is middle ground, but you win and you lose together. The bottom line is that they deserved a pat on the back on Saturday and the previous week they deserved a kick up the backside. It’s swings and roundabouts and that’s part and parcel of football.”

Tonbridge have come a long way since the 5-1 opening day defeat to Ebbsfleet, but McKimm insisted that there is plenty more work to be done as the season continues.

“It’s only six games – we’ve still got a lot of teething problems that we need to iron out,” he said. “We’ve still got a lot to do to the squad in terms of making it stronger, with Tom Hanfrey leaving as well this week and Adam Lovatt’s loan finishing. We’ve still got to tweak things and make things better as a squad. The tough start wasn’t just the Ebbsfleet game it was the Bath game, it was the abandoned St Albans game, Hungerford, Dartford, Dorking and Hampton. It wasn’t just the Ebbsfleet game that was a tough game – every game has been tough so far and every game will be tough. But we’ve now managed to get two wins and two draws out of the last four. That’s probably the best we’ve done for a long time, with the stop-start way the seasons have gone, and we’ve got to try to maintain that. There’s no guarantee we will, but we’ll put every effort into doing that. We’ve got Concord coming up and that’s going to be just as difficult as Ebbsfleet. I don’t care what people say in terms of the squad and the players – they’ll want to beat us as much as we’ll want to beat them, so it’s another hard game, to go with the six we’ve already played.”