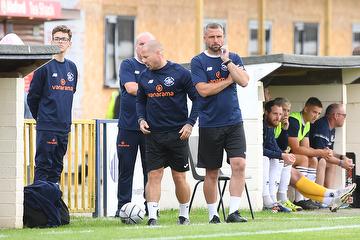 It’s been a challenging start to the 2021/22 National League South season for Steve McKimm’s Tonbridge Angels side, but the manager insists that the group is putting the hard work in to get those first points on the board as soon as possible.

“We do need points – there’s no secret of that and the players know that themselves, but we’re working extremely hard to do it,” said McKimm, speaking ahead of the trip to face Hungerford Town on Saturday afternoon. “If our final-third play becomes better over the next two games, I’m sure we’ll see some points on the board. But that’s to be shown to us. Everyone can tell us what they’re going to do, but they have to show us. And when they show us what they can do in that final third, and across the rest of the pitch, to keep us maintaining the standards we want, the points [will] start coming up on the board.”

There were plenty of positives to take from the narrow defeat to Bath City last week – and McKimm wants his Angels to build on the improvement seen in that performance.

“[We need to] keep looking after the football, as we did very well on Saturday,” he said. “And in the final third we’ve just got to execute our passes, our crosses and convert them into goals.

McKimm – who confirmed that he will have a bigger squad to choose from this weekend after three first-team players were ruled out of the Bath clash – is expecting a tough test from Hungerford, who beat Welling 4-1 away last time out.

“[They’ll be] riding high after last season – they were tremendous last season,” he said. “A new manager, Danny [Robinson] came in and did things his way. He’s still doing things his way and, like I say, they’re reaping the rewards from it. It was the first time I met him last season, and what a nice bloke he was. Obviously he gets his teams playing for him.

“So it’s going to be a tough game, we know that. It’s not the easiest of places to go to, having been there two seasons ago for a midweek game. We’re going there on a Saturday, so the journey hopefully will be a little bit easier than a midweek. We’re expecting a real tough test. Nothing is given to you in this league and nothing will be given on Saturday for sure.”