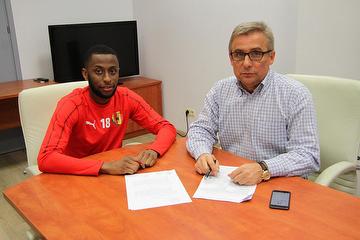 Ex Tonbridge Angels midfielder D’Sean Theobalds has completed a dream move to Korona Kielce signing a deal that keeps him at the full time top flight Polish club until the end of season 2022/23.  This comes at the completion of a successful trial, medical and participation in the team’s summer training camp in Turkey.

Joining The Angels at Christmas 2018, D’Sean quickly settled into his role as the main central midfield creator playing a significant role in the extraordinary charge up the Isthmian Premier from mid table to arrive at the playoffs and eventual promotion to National South.  D’Sean will of course always be remembered by Angels fans for the amazing equalising goal he scored in the 86th minute of the Super Playoff final against Metropolitan Police that led to extra time and eventual victory.  Whilst with Tonbridge he made 52 appearances scoring 8 goals and was frequently named Man of the Match by both sponsors and supporters.

Angels manager Steve McKimm said today: “ ‘D’ was absolutely terrific for me, a manager’s dream.  He arrived at Longmead when things were at something of a low ebb particularly for me personally and became a genuine leader on the pitch through his performances putting new life into our promotion project.  He made no secret of the fact that he felt he could at some stage play full time football and I’m delighted that he has now been given his chance with Korona Kielce.  He goes with all our thanks and very best wishes for the future.”

Theobalds joins a list of players who under McKimm and his staff’s  guidance have either seen their careers revived having been plucked from relative non-League obscurity, or in the case of younger players, promoted their cv’s  by inducting them into the world of ‘men’s’ football.”

Kielce is a City in Central Southern Poland with a population of around 195,000.  The club at the Polish mid winter break is currently sitting in 14th position in the Ekstraklasa, the country’s equivalent of our own Premier League.   Korona Kielce resume league competition on Saturday 8th February with a home match against Gornik Zabrze.