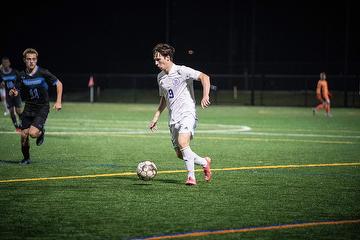 Ned Lewis ended his time at the Academy after the precluded 2020/21 season to depart for Bryn Mawr, Pennsylvania and Harcum College to study Business Management and play college football alongside his studies. To say that it has gone rather well is something of an understatement.

Harcum finished the year with a record of 11 wins and a sole defeat in their last game before the festive break. Ned, who scored 53 goals in his three Covid disrupted years at Tonbridge Angels Academy and was in the squad that won the league title in 2019/20, appeared for the senior team on one occasion and was on the bench several times, ended the term at Harcum with eight goals to his name alongside eight assists whilst his team are currently ranked 12th in the country.

His season had taken in east coast visits to Bel Air (Maryland), New York and Philadelphia, where he played at the impressive 18,000-seater Subaru Stadium.

Ned takes up his story: It’s been a big step up from the Academy and, thankfully, I adapted early. A large majority of my team are South American or Spanish speakers and their style of play differs in comparison to what I’ve been used to. They frequently play through the middle with cute touches in between to which I have had to adapt my game to suit our playing style. It can get physically and mentally tough with early training sessions and frequent games so it’s essential to look after your body within sessions and throughout the week. I’ve loved living in America, there are four other English lads here which helped me a lot settling in. I’m currently back in England for the festive period and ready for the new season through spring.

Ned is held in high esteem by his Academy manager, Tommy Parkinson who said: “Ned was an absolute pleasure to have in his three years at the Academy and a great example to anyone who joins, that if you put in maximum effort in the classroom and the football pitch, what opportunities can arise.

Ned in his three years hardly ever missed a training session or a game and,because of this, he improved immensely and even got in the first team squad on numerous occasions (notably the FA Cup tie vs Bradford). On top of that he came out when D*D* in his BTEC sport & D* in Law whilst gaining his Level 3 personal training award last year which gave Ned numerous options when he left the Academy. I am glad he chose the America route and, as you can see, he is really enjoying the experience.

His attitude was first class throughout and has turned into a top player and a top person. I am really pleased Ned is enjoying the opportunity he has now in the States, and I’ve been keeping in contact with him to see how he is progressing. Ned will always be welcomed back at the Academy whenever he returns home!