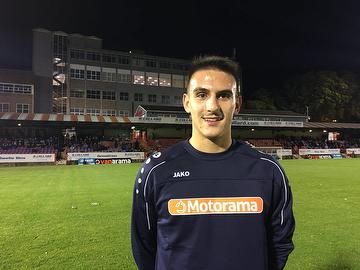 A trio of strikers gives McKimm more options up front

Home supporters arriving for the Chippenham Town fixture (4th January) will be treated to the sight of three new 1st team players who will all be available to play at least some part in the game.

Jayden Antwi-Nyame (21) joined the day before the away Hemel Hempstead fixture and made an appearance off the bench in the 1-1 draw. He is a striker who has had experience at AFC Wimbledon, Merstham and Cheshunt.

The second signing occurred on New Year’s Eve in the form of Roberto Ratti (20) who can play wide midfield, or as a striker. He was at National League Dover Athletic and previous to that at Lugano FC U21 of the Swiss 2. Liga Interregional and made his debut for the Angels in the 2-2 draw away at Maidstone United.

Finally, yesterday (3rd January) Josh Ajayi (17) joined on a work experience one month’s loan from Crystal Palace where he has turned out regularly for the Under 18s and also made a handful of appearances off the bench for the Under 23s.

Angels Boss, Steve McKimm said today: “I welcome these three strikers to the club and am delighted to have more options up front as we enter the New Year.”