Our Joe. He’s not for Turning! 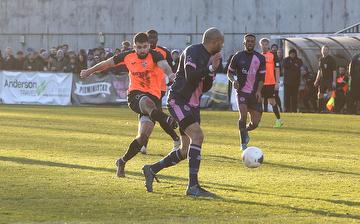 Joe Turner on board for upcoming campaign

More very good news for Angels supporters as we hear that wide midfielder Joe Turner has agreed terms for the 2021/22 season.  Arriving at Longmead for the start of the 2017 season Joe has played a significant role in the success that Boss, Steve McKimm’s squad has enjoyed.

While making 158 appearances his tally of 49 goals is very impressive for a winger but its his work rate on the pitch that mark him out as a really special player for the Angels.  Always prepared to carry out his defensive duties he is equally capable of scoring crucial goals and some of them in the spectacular bracket.

McKimm said: “Joe is an exceptionally honest and talented player and even if things aren’t quite going his way he will always give you 110%.  The supporters will be delighted and I’m delighted that he’s agreed to spend his 5th successive campaign with us.”

Picture: Joe scores the winner at Dulwich Hamlet in the 2019/20 National South campaign