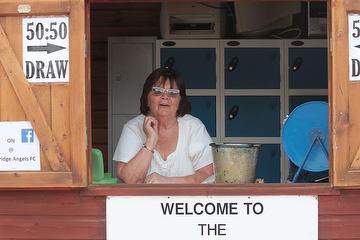 All of our supporters, officials and players will have been very sad to learn of the recent passing of Pam Watson a very familiar face around The Halcyon Wealth Longmead Stadium.

We can now confirm that her funeral will be taking place on Thursday 11th June.  As is currently the case with these occasions only a few mourners can be present at the service but we are told that the cortège will pass directly by the entrance to the ground.  Anyone wishing to pay their respects is asked to be outside the stadium just after 1:00pm observing of course social distancing at all times.  Pam’s family have informed us that a celebration of her life will be held later in the year.

UPDATE : Between 75-100 Angels supporters gathered at the gates of the Halcyon Wealth Longmead Stadium this afternoon (11th June) to witness Pam Watson’s Funeral cortège pass by the ground.  The funeral cars were met with a well deserved and rapturous applause.