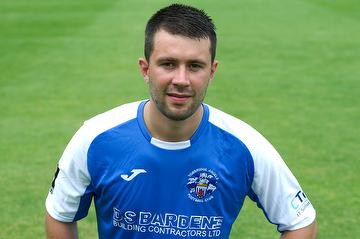 Tom will be wearing the Angels shirt for an 8th season

Central midfielder and centre back, Tom Parkinson, currently the longest continously serving player at the Halcyon Wealth Longmead Stadium has agreed terms for the 2021/22 National League South campaign in what will be his 8th season at the club.

One of Angels Boss, Steve McKimm's first signings in June 2014 from Leatherhead, Tommy has clocked up 197 appearances scoring 25 goals.   Those appearences would of course have been far greater in number but for two serious injuries.  He came back successfully after long layoffs which says much about this player's attitude, strength and determination.  Even through last season's disruption because of Covid-19, he was ablle to celebrate his first strikes at National South level.  As if all this was not achievement enough, Tommy is also the manager of the very successful Angels Academy.

McKimm said today:  "This is excellent news for everyone at Longmead.  Parky is a huge figure within the squad and will help this club to move forward."