Rewind: Journey to the FA Cup First Round 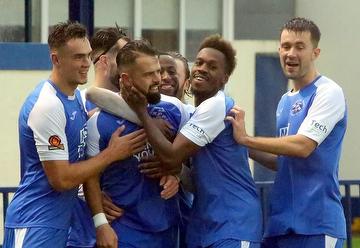 We relive our thrilling FA Cup run from last season

It was typical of the FA Cup fortunes of Tonbridge Angels that the season they reach the First Round for the first time in 48 years, the run was being played out behind closed doors at Longmead as Covid restrictions bit hard. The run created memorable moments on the pitch as supporters packed out local pubs to watch the live streams and, off the pitch, created a new Angels legend in the shape of an opposition supporter.

Due to those Covid restrictions, the FA Cup run actually kicked off before a ball had been kicked in anger in National League South on an early October, Saturday afternoon at Farnborough of the Southern League Premier Division South in a Second Qualifying Round tie.

In one of the more bizarre of Covid regulations, whilst there was a restricted attendance of 382 allowed at Cherrywood Road, supporters of elite clubs were not allowed to travel to a Step 3-7 club. A few supporters bought tickets online and gained entry and the home club did nothing to deny these people their place in the ground.

A tough game was expected, especially with the lack of any competitive football for the Angels, and a tough game was had. Jonny Henly had been injured in a training run mishap prior to pre-season and his replacement, James Shaw needed to be on his mettle as the home side made the early running and it was a slightly relieved Angels side that went into the break with the game scoreless.

The momentum didn’t change much in the second half but it was Tonbridge that went ahead after 66 minutes when Tom Derry bundled the ball home after Joe Turner had headed the ball back across the face of the goal following a Ben Greenhalgh corner to the appreciation of the Angels contingent behind the goal who made no attempt to hide their delight.

Farnborough continued to create and waste chances whilst Turner crashed a shot against the crossbar with three minutes remaining.

A relieved Steve McKimm said afterwards: “Farnborough made it very difficult for us and we had to work really hard for this win. Overall it wasn’t the greatest performance but this is our first competitive game since March and it could be around three weeks until we really get playing the way I know we can. The objective today was simply to get through to the next round and that’s what we’ve done.”

The Third Qualifying Round draw took us further west to Isthmian League South East side Chichester City on a Tuesday evening, such was the pressure to fit the FA Cup into the delayed start to the season. Once again, no tickets were made available to visiting supporters and there were fewer Tonbridge supporters in evidence with a couple even donning Chichester scarves bought online!

Tonbridge weathered an early storm and took the lead after 24 minutes when a long punt forward was misjudged by a defender and Joe Turner nipped in to slot past an over-committed goalkeeper.

The lead was only to last five minutes when a cross from the left was fairly thumped home with the vast majority of the 400 attendance believing that an upset was on the cards.

The Angels took the wind out of the Chichester sails after 65 minutes when Turner forced the ball home following a Khale Da Costa corner.

As Chichester threw caution to the wind, the Angels defence clung on by their fingertips surviving several scares and with a couple of smart saves asked of James Shaw. But hang on they did to secure their place in the final qualifying round draw.

Steve Mckimm reflected after the game: "We knew it wouldn't be easy, we had them watched twice so we were aware of what they would be about but the fact is we're through, a number of our fellow National South sides aren't and I'll take that all night long.  Credit Chichester for giving us a really tough game, but also credit my lads for giving it their all. They have had to work their socks off tonight."

The draw finally brought a home tie, albeit that it would need to be played at an empty Longmead Stadium. Taunton Town were the visitors from the Southern League Premier Division South and arrived with a good league record that suggested they would pose a threat to the long-awaited First Round berth.

The live stream had allowed supporters to book places in a few of the local pubs whilst many more settled down in front of their own televisions.

After an even start, the Angels got their noses in front after 28 minutes when Greenhalgh drove home from the left hand side of the box and three minutes before the break, Alex Akrofi converted after Sonny Miles had directed a header from a free kick back across the face of goal.

Taunton’s task became a mountain when they had a player sent off just two minutes into the second period and those supporters frequenting the pubs dared to dream when Greenhalgh scored with an excellent free kick.

Goals from Jauvan Splatt and Turner sealed the Angels place in the draw and a proud McKimm commented: “Proud, but it’s the players who should also feel proud. They did really well from 1-11, the subs and the entire squad; we are a unit, we stick together and even those who didn’t get on to the pitch this afternoon are all part of the spirit we have here.”

The eagerly awaited draw saw the Angels drawn at home to League Two side Bradford City, previous FA Cup winners (albeit in 1911) and a club that only five years previously had knocked out Chelsea at Stamford Bridge. The only sadness was that once more no spectators would be allowed into Longmead Stadium and with that, and out of Twittersphere emerged a most unlikely hero. Jonny Carrington, a Bradford City season ticker holder, thought it was unfair that a non-league side in Tonbridge Angels were denied a big pay day and set up a JustGiving page appealing to his fellow City supporters to donate and thus make up some of the lost revenue.

In 24 hours, the target of £1,000 was exceeded and by match day the amount raised had cleared £6,000. Carrington took Tonbridge Angels into his heart and the club reciprocated by taking him into theirs.

The club’s coffers were further supplemented when the game was selected for live transmission by BT Sport with the kick off being brought forward to 12:30 pm.

Sadly, Bradford City’s charity stopped at the door of Jonny Carrington and the sight of Peter Elves’ pristine pitch brought no terrors for the visitors.

Any early goal settled any nerves and when Bradford went two ahead after 14 minutes it was a long way back for the Angels. A goal right on the cusp of half-time, after a period in which Tonbridge had been fully competitive, put the game beyond the hosts. Goals in the 56th and 69th minute might have been considered a fair reflection but two more late goals gave a 7-0 scoreline that the Angels didn’t deserve.

Magnanimous in defeat McKimm said afterwards:  “The scoreline is difficult to swallow but let’s be honest we’ve been beaten by a far better team this afternoon and I don’t think anyone could deny that.  In my opinion the referee has missed a foul on Alex Akrofi and they’ve gone on and scored a crucial third on the stroke of half time. I’m not saying that we wouldn’t have lost the game, but who knows the final scoreline might well have been kinder to us. My players have given their all this afternoon and I now have to lift them for the trip to Chelmsford City on Monday evening.”

So the First Round had brought a similar result to that in 1972 when Tonbridge had been beaten by Charlton Athletic, that time by 5-0. Tomorrow starts a new journey, with supporters this time being allowed to be part of it and hoping that the route to Round One will not take another 48 years.