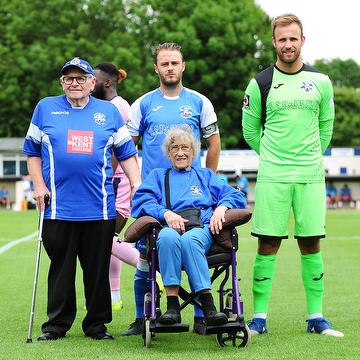 The Angels lose a loyal supporter

Rosemary was a long time supporter of the Angels along with husband George and son Kevin through the good and the not so good times.

Despite not being in very good health just recently, Rosemary led the teams out for our opening National South fixture this season against Dulwich Hamlet on 3rd August.

The club’s heartfelt condolences go to George, Kevin and the remainder of the family on the occasion of their very sad loss.

The funeral service will be conducted by Club Chaplain Neil Durling with the wake to be held at The Halcyon Wealth Longmead Stadium on a date to be advised.