Showcase game does exactly that! 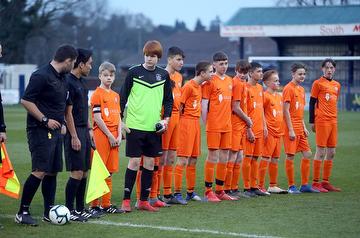 An impressive attendance of 151 were treated to a highly entertaining evening by the Under-14 squads of Tonbridge Angels and Brighton & Hove Albion in a game that truly lived up to its showcase title.

One first half and two further goals in the second period settled the game in the visitor’s favour by 3-0 but both teams emerged with great credit for both their technical ability and their fitness to cope with a pitch much bigger than they were used to.

With both teams having large squads and everybody wanting the opportunity to grace the Longmead turf, the managers decided to play the full 45 minutes per half as against the 35 that is normal for this age group.

Far from being daunted by the size of the pitch, the youngsters actually revelled in its space with both teams passing the ball out of defence and into the midfield areas. In the first half, neither goalkeeper kicked the ball from his hands long.

Brighton, as should be expected of a Premier League side with their coaching resources, were technically more proficient but at no time were the Angels boys overawed and when on the ball they were more than capable of showcasing their own talents.

Brighton went ahead after 12 minutes when a cross from the bye-line was tucked home at the near post but the Angels recovered their composure and held their own for the rest of the half.

Two second half goals gave the Sussex side a scoreline that was perhaps a little flattering whilst Tonbridge, try as they might, could not breach a well disciplined Albion defence.