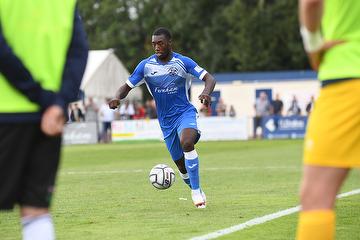 In this new feature, we take a closer look at some of this season's new signings at Tonbridge Angels

Aaron Smith-Joseph has undoubtedly been one of the bright sparks of Tonbridge Angels’ National League South season so far, delighting fans with his direct running and work ethic.

Smith-Joseph joined the club in the summer, with manager Steve McKimm praising his “hunger and enthusiasm” in training – qualities that have been in plentiful supply so far this campaign.

The 24-year old has started all five of our matches in the National League South so far, as well as the home game against St Albans which had to be abandoned late on due to an injury to one of the visiting players.

Following the difficult afternoon at Ebbsfleet, Smith-Joseph began to show what he is capable of in the Week 2 clash with Bath City. The forward found the side netting on 40 minutes after controlling well and using his pace to burst into the box, before a powerful run down the left from inside his own half led to a dangerous cross on the stroke of half time. Smith-Joseph was central to the Angels’ efforts to salvage something from the match with Bath, but the visitors hung on for a 1-0 win.

The following week, away at Hungerford Town, was the moment when Smith-Joseph really announced himself to the Tonbridge faithful. In an imperious display, he gave the Angels an early lead by sweeping home a cross from the right before providing the assist for Tonbridge’s third goal, as McKimm’s side ran out 3-1 winners at Bulpit Lane.

Those performances were enough for Smith-Joseph to be voted as the Horsepower Motor Centre Player of the Month for August, winning 44.2% of the votes cast on our Twitter page.

Smith-Joseph’s good form continued at the start of September, as Hampton & Richmond Borough visited Longmead. The 24-year-old forced a corner on the half-hour mark following a powerful cross/shot, while a decent effort on the half volley from the left side of the box sailed narrowly over on 60 minutes. Smith-Joseph also drew a save from the keeper from a direct free-kick on 90 minutes, as the Angels pushed for the late, late equaliser that was eventually provided by Ibrahim Olutade. The wide forward also recorded a message for the fans after the 1-1 draw, thanking them for their votes in the Player of the Month poll and their support throughout the game.

One of the most encouraging signs this season has been the burgeoning partnership between Smith-Joseph and Craig Braham-Barrett down the left flank. And that understanding was certainly on show in the impressive 1-1 draw away at Dartford on 11 September, when the two linked up midway through the first half for Smith-Joseph to draw a smart save from the keeper. It was Smith-Joseph’s cross that led to one of the best chances of the second half for the Angels at Princes Park, with Joe Turner shooting narrowly wide after the initial shot had been blocked. There could have been more too, as Smith-Joseph appeared to be through on goal in second-half stoppage time, only for the Tonbridge man to be brought down by a Dartford defender.