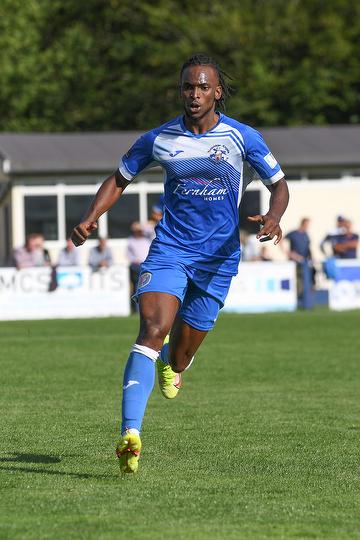 Our Spotlight feature returns, with Ibrahim Olutade the focus this time

A return of four goals from three starts has made it an impressive start to life at Longmead for Ibrahim Olutade, who has won the admiration of many fans for his hard work, attitude and – of course – goals.

The 23-year-old joined the club in the summer following a two-year spell with neighbours Maidstone.

“I believe he has a point to prove and I think he can do that with us,” said Steve McKimm in reaction to the signing – a belief that has been proven right, judging by Olutade’s early-season goal tally.

Olutade began the season on the bench at Ebbsfleet United, where Tonbridge were subjected to a galling 5-1 defeat on the opening day. But there was at least a silver lining on the day for Olutade, who came off the bench to stab home the loose ball after Ricky Modeste’s effort had been saved initially.

That performance led to a start the following week at home against Bath City, though Olutade had little joy as Tonbridge slumped to a 1-0 defeat – despite a much-improved performance all round.

After missing the 3-1 win away at Hungerford, Olutade was back in the squad for the visit of Hampton & Richmond Borough. The striker again started on the bench, but was summoned by McKimm with the Angels staring down a 1-0 deficit with ten minutes remaining. On came Olutade and – deep, deep into second-half stoppage time – the striker made himself a hero by stabbing home in the box to salvage a dramatic point for his side. Speaking after the game, Olutade described it as a “great result” and credited the fans for fuelling the Angels’ search for an equaliser.

Olutade was again on the bench for the visit to Dartford the following week, as Tonbridge produced a fine performance at league leaders. The striker was brought on for Tommy Wood – who scored the Angels’ goal – in the 77th minute and thought he’d scored moments later, but the linesman’s flag meant his header from a Tom Beere free-kick had to be ruled out.

Olutade was in the starting line-up for the visit of Dorking to Longmead on 25 September, lining up alongside fellow striker Tommy Wood for the first time. And the 23-year-old again showed off his striker’s instinct with the third goal in our 3-1 win, slotting home the loose ball with aplomb.

Olutade kept his place for the visit of Concord Rangers the following week – and produced one of his best performances yet despite the Angels going down 3-2 at a sodden Longmead. The striker was lively in the first half, forcing the keeper to concede a corner on 10 minutes then drawing another save with a header from the set play that followed. And Olutade played a key role in the opener on 37 minutes, forcing the mistake from the defender on the right side before squaring to Joe Turner to slot home. Olutade’s fourth league goal of the campaign then arrived on 50 minutes, as he stabbed home at the far post to haul us level at 2-2.

With four goals from six league appearances so far – and only three of them starts – Olutade has certainly hit the ground running at Tonbridge Angels.