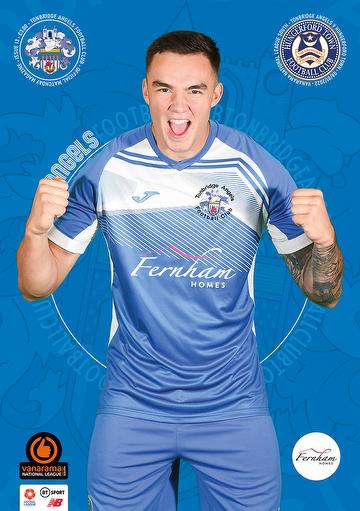 Tonbridge face the first home game of the year this Saturday against a Hungerford side looking for their fifth away win in a row.  A win for the Angels would mean a first double of the season.

They start the game two places off the bottom but Steve McKimm says that's not showing in the players' confidence:

"We know the position we're in, what we've got to do, we've just got to get out of the hole we're in at the moment.  There is no lack of confidence in the side, no lack of confidence in the staff, all it is... is we're not getting the results sometimes we deserve.  We are getting the results we deserve sometimes when we get beaten.

"We'll prepare for Hungerford like every other game, we know how tough it will be, and see if we can get anything from it.  They're a very good side, we have our work cut out.  We're not doing well enough in terms of results and we have to start bucking our ideas up, all of us."

"Adam Coombes should be available.  We've got the majority of players fit but anything can happen before Saturday.  We'll wait and see who we can choose and who we can't.

At the start of 2019, the first home game of the year saw Angels end a bad run and start an improvement which eventually ended in promotion.  The game was against Brightlingsea Regent and it is seen by many as the turning point of the season. Steve was asked whether this game could be the "Brightlingsea" of 2021/22:

"I'm not sure everything did turn round that day.  We were 2-0 down with ten minutes to go and we drew 2-2 and it was another game we didn't win.  It was after that game when things seemed to click into place", he said.

Steve also paid tribute to goalkeeping coach Adam Deadman who has decided to leave the club for family reasons after 18 months at Longmead.

Steve said:  "Adam has done very well.  He stepped up and took the opportunity he was given.  He's got a good relationship with Jonny and with us, and he'll be missed.  Family is more important than football and he's got to look after his sons, that's why he has to hang up his gloves.  We will welcome him back whenever he comes to watch games.

"We've got Gareth Newton, a UEFA B coach, previously at South Park, so like Adam he's come from lower league.  We're giving him an opportunity to show us what he can do."

Steve was in conversation with Matt Davison