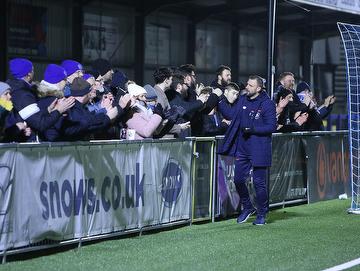 Angels travel to the league leaders this Saturday

If the league table is anything to go by, it could be Tonbridge's toughest game of the season at Dorking on Saturday (5th February).

But we have beaten them this season, 3-1 in September.

Steve McKimm said one of the factors for Dorking could be the number of players now available:

"Like every game we play, especially against Dorking, it's very hard,  It's eleven on the spin for them.  They get their players back, and as they get theirs back we have two or three who are touch and go.

"The other day (their manager) Marc White said he's got five in the stands as well as his sixteen.  He's always said when he gets his full side back they'll be a force to be reckoned with and the proof is in the pudding.  Alfie Rutherford's on fire, James McShane is always going to get goals, McManus will chip in and Briggs is in good form.  They've got a lot of players in form at the same time, but if you win that amount of games you deserve to be where you are, they're flying."

This is the first of three big games in eight days for the Angels.  After Dorking it's a trip to Eastbourne on Tuesday before the big FA Trophy fifth round tie against Bromley, but although it's one game at a time, Steve McKimm doesn't think the Trophy run is any distraction:

"We are having a good cup run, we have an exciting game to come but two league games before that.  The squad will be needed.  It's a tough ask but we look at Dorking first, then Eastbourne, and we can look at Bromley after that.

"Any game is important, and if you can get yourself a step closer to Wembley, what momentum that will give us going into the next few league games.  Our season isn't dead.  We're in a scrap at the bottom and in a cup competition.  The fans have something to cheer about and let's hope we can bring them even more to cheer about."

Steve also said it's too early to know which players are available, with a number of injuries being looked at between now and the game.

"We won't know until Saturday morning.  Sonny should be available, Adam Lovatt and Parky have a knock and so does Tommy Wood, so we'll have to see what happens when Melvyn has a look at them."