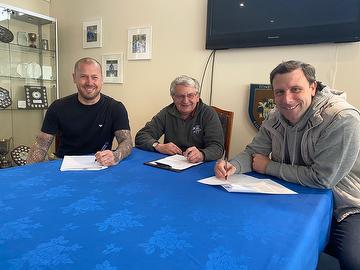 All smiles as pens are put to paper

Tonbridge Angels FC is delighted to announce that new deals have been signed with Manager, Steve McKimm and Assistant Barry Moore that confirms both the club’s and management team’s long term commitment to a partnership that aims to continue the Angels on pitch progression.

The bespoke contract provides security for both club and managers and gives the opportunity for Steve and Barry to build for the future with the aspiration of promotion to the top rung of non-league football.  Said Angels Chairman Dave Netherstreet: “We believe that Steve and Barry are the pair to help us achieve that success; given the challenges of running a semi-professional club they have done brilliantly over the last seven years and we believe that success can continue and grow.”

McKimm arrived at the Halcyon Wealth Longmead Stadium in May 2014 following the club’s relegation from Conference South the previous season with Moore joining him soon after.  They virtually had to build a new squad from scratch and whilst that first season in charge was challenging with Isthmian Premier survival achieved with one game to spare an immediate uplift in fortunes followed with a semi-final play-off appearance.   Promotion to National South came in 2019 via the Super Play-Offs and the 1st round proper of the FA Cup was reached in 2020 the first time this stage had been reached by the club since 1972.