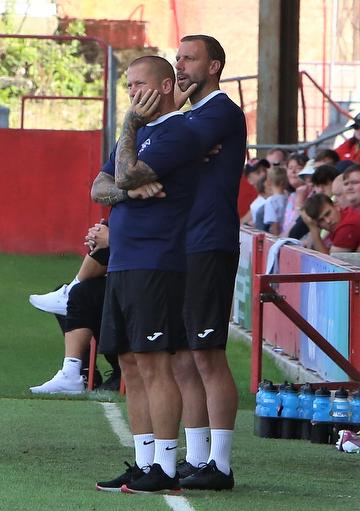 Steve McKimm vowed that his Tonbridge Angels team would build on their improved second-half performance after a 5-1 defeat at Ebbsfleet United on the opening day of the Vanarama National League South.

“We’ll move forward from that [the second-half result],” said McKimm after the game. “It’s the first game and as I’ve said to the boys, no one likes losing any game. To lose in the manner we did in the first half hour – that wasn’t us.”

McKimm credited the travelling Angels fans for their unwavering support through the defeat on Saturday.

“They were fantastic today – absolutely fantastic,” he said. “To see your team go 4-0 down inside half an hour and [show] the amount I saw behind that goal in the second half. I’m just pleased we gave them a goal to cheer. The performance wasn’t [there], but it was a goal to cheer. I know they were desperate to get back inside the ground and next week at Longmead it should be rocking.”