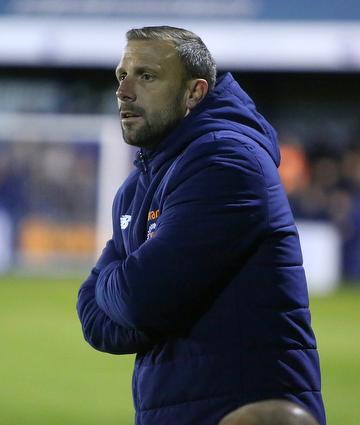 Angels Boss, Steve McKimm says he saw enough in the Boxing Day defeat against Maidstone to give hope of a better result when the sides meet again on Sunday.

The Longmead derby was settled by a single Michael Phillips strike, and after our trip to Eastbourne was postponed, he has used the time to train more ahead of the trip to the Gallagher Stadium.

He explained: "We trained and we trained very hard.  It doesn't replicate a game, I was gutted we couldn't play because I wanted to rectify our wrongs from Sunday, but we'll go in good spirits, we're a good side and the supporters appreciated that by applauding the players off in their numbers even though it was a derby defeat.  We want to give them something to cheer about when we go to Maidstone on Sunday.

"They've got a good squad, we've got a good squad, they got the goal, we didn't, there's not a lot in it.  Moving forward we take confidence from what we were good at, just make it a little bit better.  We obviously want a different score.  They've beaten Welling 4-1 so they've scored four in their last two home games.  We managed to stifle it at our place, we hope to do it again and this time take our chances."

Steve says the players who've missed the last few games should be back in contention meaning he could have decisions to make on Sunday.  He said: "It's going to be tough to choose a side and a squad, but we'll do that with eyes on the prize of winning the game."