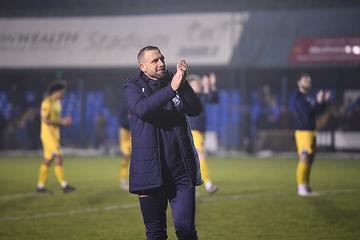 The Manager looks ahead to Hemel Hempstead Town

Tonbridge are looking for three straight league wins for the first time since they won promotion in 2019 when Hemel Hempstead Town visit The Halcyon Wealth Longmead Stadium this Saturday (22nd January).

Wins over Hungerford and Chippenham, sandwiching the dramatic FA Trophy game against King's Lynn have given a different feel to the place going into Saturday's game.

Manager Steve McKimm said:  The main thing was getting the back to back league wins we haven't had all season.  On Tuesday we got it at Chippenham, which was deserved.  Hemel have been on a good run, they're on a good run with a new manager (Mark Jones).  He's got the squad sorted out and they'll be a tough nut to crack.

"He's got them playing well, and for each other and they're his players he's brought in.  Their away form has been good, their home form hasn't been, that win (against Bath) was their first since 2020.  They'll be hard to beat, competitive, and we've got to do what we've been doing to compete."

It was clear the main problem in our winless run at the end of 2021 was not finding the net, something Tommy Wood has addressed with four goals in two and a bit games.

Steve said: "I don't think we've been playing any differently, we're just taking chances.  Woody had two chances on Tuesday and he scored one of them.  There's no secret remedy.  We're doing exactly what we were doing, but we're getting the chances converted and we're getting points from it."

After naming an unchanged starting eleven on Tuesday, we will have a similar squad to choose from on Saturday:

"Doug Loft is suspended, Parky will hopefully be back in the squad (after injury) but we'll wait and see.  Tommy Wood's calf was tight on Tuesday, so we'll see whether he'll be involved Saturday and it's Adam Lovatt's last game on Saturday (on loan from Sutton).  He's done ever so well but we can't extend it, he'd had the maximum three months."

Please click Here to be taken to the Angels ticket selling portal where you can purchase entry for this Saturday’s game (KO 3:00pm) and even pre-order programmes.