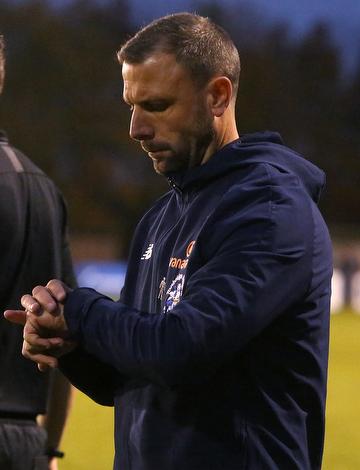 ‘We don't want to finish in the bottom four’

However despite needing only a point, Steve McKimm's ambitions don't stop just at avoiding relegation:

"That's the main thing but we don't want to finish in the bottom four.  If four teams had gone down we'd have been a team to be relegated and we don't want that going into next season.

"Bath got a good win at Billericay last week.  The two sides we're playing this weekend are at different ends of the table but they're both very good sides.  Cooke and Fletcher are good and they've got a good young side.  They get good loanees from the area they're in and they're in a position that warrants it at this stage of the season because I don't believe anyone is in a false position.  You are where you are and it's decided on points.  If you feel you should be higher in the league you should have more points on the board.  They won't be happy where they are and we aren't happy where we are but we've got three games to go to accumulate as many points as possible.

"We've got a few knocks and niggles and we'll assess them.  Harry Hudson leaving puts us down to seventeen and we had a couple of knocks so we'll wait and see who we've got available."