Tell us, We’ll Tackle it 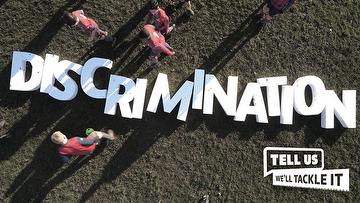 The Football Association has  launched a new anti-discrimination campaign, aimed at raising awareness of how and why you should report any instance of discrimination.

The campaign will re-confirm The FA’s zero tolerance stance to discrimination in the grassroots game.

The new reporting process will be available at the same time as the campaign, which encourages people to report incidents at www.TheFa.com/TellUs