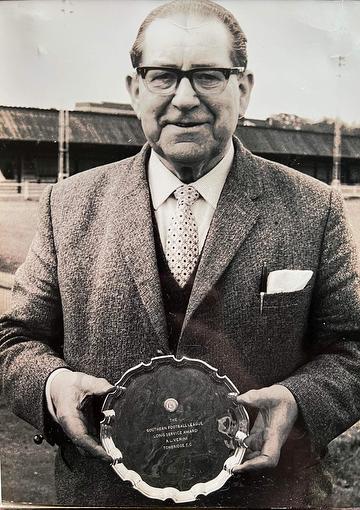 Your chance to vote for the recipient of this season's award

Do you know a person who you feel goes the extra mile for Tonbridge Angels but, perhaps, their efforts have gone unrecognised? Now is your opportunity to change that!

The Austin Verini Trophy, awarded to the club person of the year, is one of the most prestigious awards presented by the club but in the last two Covid-disrupted years has not been awarded.

The award was inaugurated by the Supporters Association in 1992 when Steve Clark was the first winner. The Association ruled that no one person can win the award twice, although there have been a couple of exceptions when, in 2013, Melvin Slight along with Tina Jenner, won the award having previously won it himself in 2009, and then in 2010 when as a Board Member Maurice Brown took the award jointly having already won it outright in 2004.

So, who was Austin Verini? Austin (pictured here) was the club’s treasurer for over 30 years beginning his tenure in 1951. When the club was formed in 1948 he was appointed the Assistant Secretary but three years later became Secretary and Treasurer. At times he acted as Trainer (Physio in today’s terms), accompanying the Metropolitan League side in that capacity.

In the past, and the previous winners are listed below, the board or a committee has decided who the recipient will be, but this year, the board have decided that the decision should be made by supporters.

So, it’s going to be a bit like the Oscars! In the first instance we are asking for nominations, please send the name of your nominee to wink.tomkinson@tonbridgeangels.co.uk by Friday, 1st April. Once we have assembled a list, we will whittle this down to four nominees, by virtue of the number of nominations they have received and this will then go to a vote.

Now is the time to give that unsung hero their moment in the limelight!