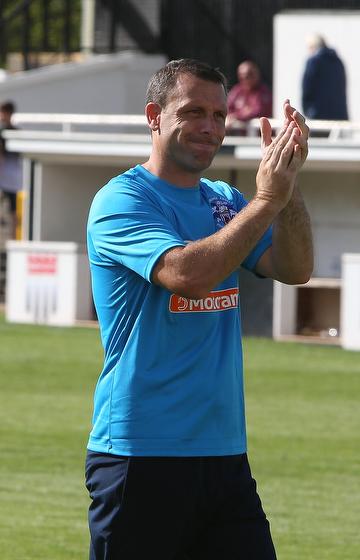 Don’t misunderstand him, Steve McKimm loves keeping supporters on the edges of their seats.

But he thinks Tonbridge may need to start sacrificing their tag as the National League South’s great entertainers.

It’s certainly not been a quiet last few weeks for the Angels home fans.

Most are still catching their breath from the incredible 4-4 draw with Oxford City. That came after the harrowing late drama against Chelmsford City at Longmead.

Who could forget the 5-1 win over another Essex club, Braintree, seven days before that?

Now in a special feature with sponsors Vanarama, the manager thinks calming things down a little may be the way to go.

“We’ve certainly put our supporters through it in the last few weeks!” McKimm laughed.

“It’s been a really entertaining and interesting start to the season. We knew it would be tough and that’s certainly been the case so far.

“Maybe we have got to be a little less good to watch in a way, we’ve got to cut out the mistakes which are costing us. You just can’t legislate for some of the errors but it’s football. We deal with it.

“That’s the issue I think. We showed against Oxford the good points and the bad points - it doesn’t take a genius to tell you we have to stop letting in late goals.

“So people say maybe we need a little luck but I was always told you make your own.

“We can’t keep a clean sheet, but on the flip side we are scoring and we look dangerous whenever we play which is really positive.

“It’s about turning zero points into one, and one point into three as often as we possibly can.”

McKimm can’t wait for this weekend’s trip to Hungerford in what looks a big match less than half the way in.

“They’re all big but Hungerford aren’t far ahead of us and it’s another chance to get a win on the board,” he said.

“It’s still a bit of a learning process but we know this league would be a step up.

“It has certainly been that. Strikers at this level are the main difference I have found - maybe in the Isthmian League you could get away with the odd moment but here, if they get a chance they take it. It’s ruthless, we have found that out.

“Our side has a great work ethic and I can’t speak highly enough of them for that. They give everything every time they go out there.

“I’m loving the National League South and so are the fans I’m sure. They have seen a lot of goals lately and I’m sure they are going home entertained.

“But it’s the points we need and wins on the board. We’ve got every chance if we keep believing and keep improving.”

ONE SIMPLE TEXT CAN BOOST THE MANARAMA CAMPAIGN!

Getting involved with the MANarama campaign as we try to combat Prostate Cancer could not be more straight forward.

Give... donate to Prostate Cancer via text

Go... then bring others into play by sharing on social media with #GiveAndGo.

FREE MINIBUS FOR YOUR CLUB

To say thank you to the incredible fans and clubs of The National League for supporting our MANarama campaign in aid of Prostate Cancer UK, we're giving a FREE minibus away to one club.

When your club hits £500 they go into the hat! Find your club's just giving Page here

Massive thank you to the clubs that have raised the most so far.

For the latest van leasing deals head to Vanarama.

For the latest car leasing deals head to Motorama.