The Vanarama First Four - why Tuesday night is just the start for Tonbridge! 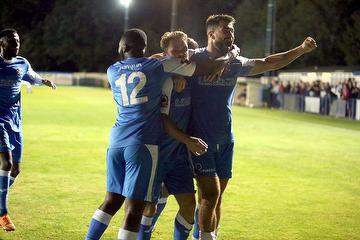 League sponsors Vanarama have been busy assessing the season so far - and what’s to come!

The story so far…

In short, the team have certainly not looked out of place in the Vanarama National League South. After three nip-and-tuck defeats, Tuesday’s late win over Concord Rangers had been coming.

What does Steve say?

Manager Steve McKimm doesn’t disagree. “In the first three games, we’ve shown we can compete - nobody can question the desire and commitment of the team. They haven’t been lacking confidence and they are over the moon to get that first win.”

It has to be Tuesday, of course. Nothing beats a last-minute winner but it’s even more special when it secures a first victory in a new league.

Sonny Miles has shone. He stood out against Concord but certainly wasn’t the only one.

What the fans say….

They were a happy bunch on Tuesday night - and it’s clear to see why.

“Up and running! Fantastic result” said fan @StuartDade on twitter.

The fixture list could be kinder. It’s a trip to Bath City, the undefeated Romans who went top of the lot on Tuesday night. The don’t lose many at Twerton Park.

Bath’s one to watch….

Flying winger Ross Stearn is a handful. Manager Jerry Gill has Bath playing a great brand of football and they are among the sides predicted to challenge.

Haven’t we met before?

The last game between the two sides came five years ago. The 1-1 draw on a cold January afternoon wasn’t one to remember.

Quite simply, Twerton Park in August is a dream. It’s a lot of Non-League football fans’ favourite away days - and with good reason. Bath is a brilliant city, and well worth making a weekend of.

League sponsors Vanarama have recently launched the National League Club Reward scheme to help fans back their club’s budget. Every time a fan takes out a brand new van lease with Vanarama or a brand new car lease with Mototama their club will earn £100 and you will receive £30 cashback!

For the latest van leasing deals head to Vanarama.

For the latest car leasing deals head to Motorama.