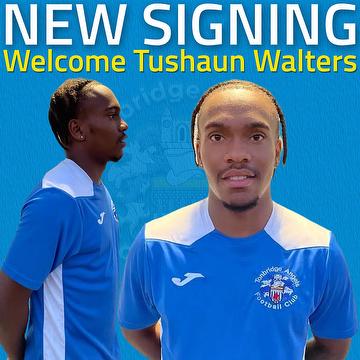 Saunders - “Supporters will quickly take to (him)”

As a young player he was on the books of Tottenham Hotspur for eight years before trying his luck in the non-league game with Abbey Rangers.  There he was noticed by no less a club than Chelsea where he was to make 13 appearances for their U18s side.  It was back to grassroots football for Tushaun with spells at Greenwich Borough and Herne Bay where he was a regular scorer  and assist maker for both clubs before linking up with the Stones in the summer of 2021.

Said Angels boss, Jay Saunders: “Tushaun is an exciting player who I believe the supporters will quickly take to with his attacking wing play.  I’m backing him to get assists and weigh in with the odd goal or two.”