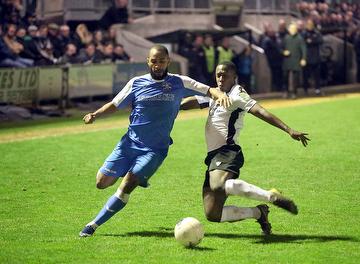 It's Goodbye to Jared and Alex

Jared Small and Alex Bentley will not be wearing an Angels shirt when the 2020/21 season eventually gets underway.

Jared joined the club in August 2018 from Harlow Town and featured regularly as a right sided wide player.   In his time with the Angels he made 77 appearances and scored 3 goals.  He will be fondly remembered by supporters for his extra time assist for the winning goal in the 2019/20 Super Play Off final.

Alex arrived in May 2019 from AFC Hornchurch as part of manager Steve McKimm’s plans for the Angels first season back in non-league’s 2nd tier. The right full back was not to disappoint making 26 appearances during 2019/20 before the campaign was brought to a sudden halt last March.

McKimm said today: “I would like to thank both these payers for their tremendous efforts while with me.   I wish them both the very best of luck as they move forward in their footballing careers.”