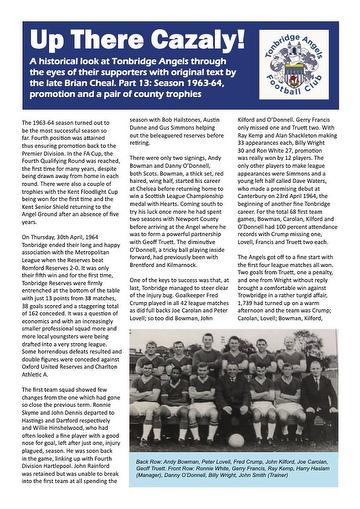 We've reached season 1963-64, one of the most successful in Angels history

1963/64 was the most successful season to date bringing promotion to the Southern League Premier Division and also two county cups.  Click here to read this absorbing edition which is sure to bring back many memories to our older supporters.

In this issue there is a feature article from a 2012 issue of Backpass in which Gerry Francis relates his journey from Johannesburg to Tonbridge via Leeds United. Gerry was a legend in a side that carried more than one able to trade that title and Geoff Truett, one of greatest ever Angels player, is also recalled.

(A request from Wink Tomkinson) 'We are now in the years which many people who still watch the Angels were present, on the terraces, at the Angel Ground. I am struggling for photographs, so if anybody did happen to have photographs or cuttings from the mid-1960’s I would appreciate them being loaned to me, or if you are able, scanned and emailed to me at wink.tomkinson@tonbridgeangels.co.uk '

Thanks are due to Wink Tomkinson for editing and designing, Dan Couldridge for statistics and of course the late Brian Cheal as author.