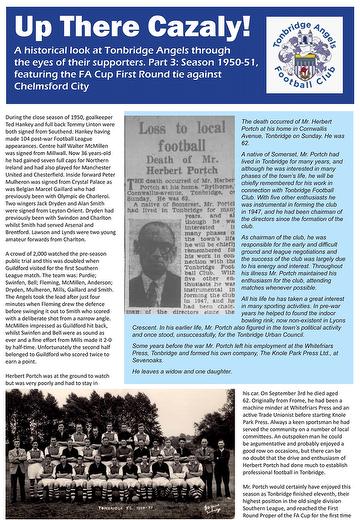 Up There Cazaly! is now available. Part Three covers season 1950/51.

The season was marked by a first-ever appearance in the FA Cup First Round Proper. Unfortunately, after managing a draw at a fog-bound Chelmsford, the replay was lost by a goal late in extra-time.

Question: How come 5,000 Supporters were able to cram into the Angel Ground for the Chelmsford FA Cup Replay on a Weds during the days before floodlights? OK it might have been Early Closing Day (Remember them!) in the town but even so it would appear many local factories would have been short of staff!!

The season also saw the passing of the founding Chairman of the club, Herbert Portch.

Thanks and well done to Wink Tomkinson and Dan Couldridge for all their hard work in producing another fascinating edition and of course the late Brian Cheal who did so much to lay the foundations for recording the early history of the Angels. A great read!

Just simply click or tap here to read Cazaly No 3.

For previous editions of Up There Cazaly!, please either click or tap here and scroll down the page.