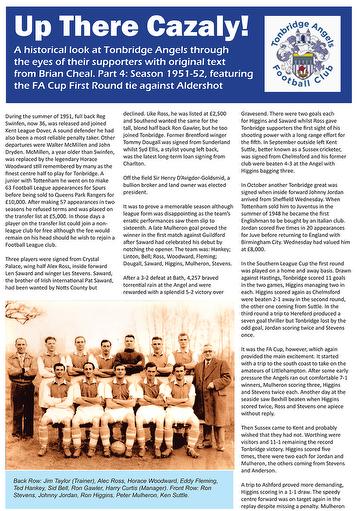 Up There Cazaly! Issue Four is now online

This issue covers season 1951/52 when the club completed a second consecutive FA Cup run to the First Round where the Angels met Football League opposition for the first time in the shape of Aldershot in front of a crowd of over 8,000 people.

There are player focuses on Horace Woodward and Ken Suttle plus the club being given the go ahead to erect the Long Stand that continues to grace Longmead today.

This was also the season when the Reserves brought home the club’s first ever trophy.51/52

Please click or tap here to read Cazaly No 4

Thanks to Wink Tomkinson, Dan Couldridge and the late Brian Cheal for this fascinating history of the Angels