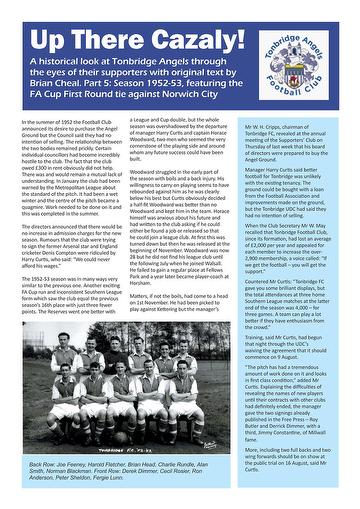 Time on Your Hands? Then take a read of Up There Cazaly! Part Five covering season 1952/53 and now online.

The season saw a third consecutive appearance in the FA Cup First Round(those were the days!) and a tie against Football League opposition in Norwich City which ended in controversial fashion.

There was also a new man at the helm in Douglas Hunt and we profile Charlie Rundle.

As ever we are indebted to Wink Tomkinson, Dan Couldridge and the late Brian Cheal for their efforts in putting this altogether.

Just simply click or tap here to read Cazaly No 5.

To see all previous editions of Up There Cazaly!  just click or tap here and scroll to the foot of the page.