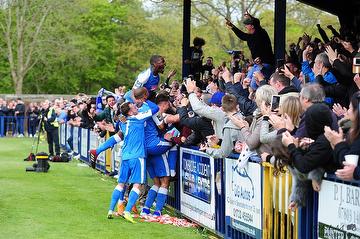 The new season is nearly upon us - so what have Tonbridge fans got to look forward to?  A few things. Seeing some bigger clubs and hopefully bigger attendances at Longmead and of course visiting some new grounds. And hopefully a decent FA Cup run for the first time in a few years!

What does National League status mean to a supporter? For us, it’s validation of all the hard work the manager and players have put in over the last few years. It’s also stepping up to play against some of the bigger local teams, which have looked down on us recently.

What’s been the best bit of business done over the past few months by the club? Steve McKimm staying on as manager was a huge relief, as well as re-signing Joe Turner who was our Player of the Year last season. The new acquisitions look impressive, particularly Tommy Brewer.

Who will be your one to watch come kick off?  D’Sean Theobalds keeps getting better and better and should impress at the next level.

But who are the other clubs to watch out for and could be in the promotion mix?  The obvious one is Havant & Waterlooville. Paul Doswell has gone down there and is already making an impact. Also, I hate to say it, but Billericay look as though they will be in the mix - they have made some big signings recently.

Where can’t you wait to visit?  Hampton & Richmond. My favourite Non-League ground, apart from Longmead of course! Also looking forward to the trip to Bath on August 17.

But what match would you like to win more than any other?  Maidstone. You really need to ask?!

What opposition player would you most like to see in your side - and what makes him stand out above the rest?  Of the players we saw last year, Jason Prior at Dorking. He scores goals for fun and we have been crying out for that kind of player for a while now.

Now the key question - where do you predict Tonbridge will finish?  If we are honest, we will be fighting in the lower half of the table. I can see us having some good patches of form throughout the season, and sealing survival with a few games to go.

Vanarama, the leading van leasing brand in the UK, have recently launched the National League Club Reward Scheme to help fans back their club’s budget. Every time a fan takes out a brand new van lease with Vanarama or a brand new car lease with Motorama their club will earn £100 and you will receive £30 cashback. For the latest van leasing deals, head to Vanarama. For the latest car leasing deals, head to Motorama