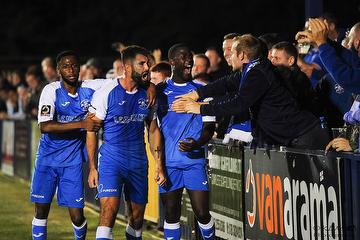 League sponsors Vanarama have been busy opening the changing room doors....so what lies behind

You can choose three team-mates to go on a road trip with – who do you pick to jump in the car and why?

First and foremost I’d take my left side partner Jack Parter, couldn’t leave him behind. The skipper Tommy Brewer would have to come, life and soul and can sniff out a pub anywhere. Lastly I would bring Tom Derry because otherwise he’d get upset and feel left out, poor kid.

There is no doubt that has to be Jonny Henly, he’s a nightmare bless him. He doesn’t know where he is half the time.

Which player would you not let touch your car stereo?

Music is a constant battle in our changing room but worst taste in music has to be Liam Smith - the young gun of the squad. He’s learning though.

Who is most likely to become a manager when their playing days are over?

Tommy Parkinson is the most obvious choice. He is currently and very successfully plying his trade managing the Tonbridge Academy side.

To be fair to him it’s our keeper again, Jonny Henly. We constantly have to bare witness to “The Jonny Show”.

Who spends the longest in front of the mirror after games?

Tom Derry. Also known as Mr Tinder. He could shower first and still be last out the changing room.

So which player is the Teacher’s pet?

Who would you say is your best mate at the club?

To be honest it’s a close squad and we’re all tight. But I’d have to say Jack Parter.

Which players gives more than anyone in training?

That’s a tough one but that has to be Sonny Miles to be fair. Mr Consistent.

But who is the first off the training ground?

The least best trainer? That could be any of us... It changes on a regular basis!

Who’s got the most annoying habit?

Sponsors Vanarama have recently launched the Club Reward scheme to help fans back their club’s budget. Every time a fan takes out a brand new van lease with Vanarama or a brand new car lease with Motorama their club will earn £100 and you will receive £30 cashback!