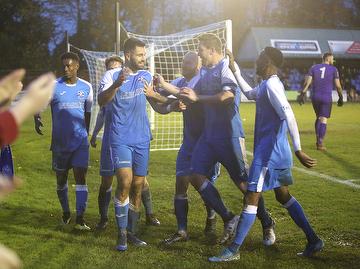 It’s gone by in a flash! We’re approaching the half-way point of the season already - sum things up.

I don’t think too many fans believed in their heart of hearts we would be battling at the top. Most of us just wanted a passionate team to watch and to stay up. We’ve got every chance of achieving that goal.

You are the great entertainers at home!

It appears we are, but I would take a few more boring 1-0 wins! Longmead is the place to come for entertainment.

What will it take to stay up for another season?

Carrying on winning our home games and to stop letting in so many goals. You can’t legislate for errors but if we just start keeping a clean sheet here and there it will be a huge help. We kept Slough out who are flying but we need more.

The busy Christmas and New Year calendar - love it or hate it?

I’m not an every game supporter but I those who go to every match won’t hear a word against it so I would say no to winter break!

Christmas is coming - if you could gift wrap one present for manager Steve McKimm, what would it be?

An away victory. We haven’t had one yet and with three away coming up in the space of ten days what better time is there to break the ‘curse’.

I hope survival, but I will happily accept the club continuing to flourish on and off the pitch.

Your player of the season so far?

I have enjoyed watching us again this season. I like (Khale) Da Costa and Joe Turner always gives everything.

The year is nearly over. Your 2019 highlight?

Winning promotion was very special and even more so because of what we needed to do to earn it. Nobody should ever count us out.

From what you have seen, who is winning the National League South?

Wealdstone unless Havant & Waterlooville go on an incredible run. I didn’t see enough from Slough a few weeks ago to suggest they will win the division.

We all love away days: what one sticks out this season as your favourite and why?

Seeing as we haven’t won away yet there hasn’t been too much to shout about away from home by I enjoyed the matches at Slough and at least we saw six goals at Welling and it’s local. There is a lot of travelling this season.

We all love our club but why did you start following Tonbridge in the first place?

I saw my first game in 1995 and travel from Sevenoaks at least twice a month to see the club play.

What makes the club so unique and so special to you?

The friends you make and the positive atmosphere created. Non-League football isn’t like anything else and it’s something everyone should support and get behind. Backing your local club is so important, the Premier League doesn’t need your money.

The National League’s leasing partner Vanarama have this season launched the Club Reward scheme to help fans back their club’s budget. Every time a fan takes out a brand new van lease with Vanarama or a brand new car lease with Motorama their club will earn £100 and you will receive £30 cashback!

For the latest van leasing deals head to Vanarama

For the latest car leasing deals head to Motorama