We Met the Manager (and Vice Captain) 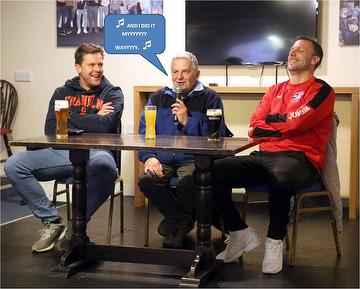 Angels Chairman, Dave Netherstreet chaired a Meet the Manager evening 19th November) in the Longmead Lounge attended by around 30 supporters.

They were treated to an amusing, informative and at times revealing set of answers from Manager, Steve McKimm and Vice Captain, Sonny Miles who has been captaining the side during the recuperation from injury of Tom Parkinson.

McKimm said in answer to his assessment to the team’s performance so far this season : “Their effort has been remarkable since the season started. They have acquitted themselves very well although perhaps the points tally doesn’t reflect that.  You are more likely to be punished for any mistakes you make.  Our aim for this season is quite clear and that is to finish above the drop zone and we can then move on from there.  To be honest this team is playing currently the best football since I’ve been here.”

Sonny Miles talked about his season at Maidstone United.  “The situation was that we had been relegated, I had a house in Maidstone and a young family and they were paying better money than I could have earnt here at the time.  Playing for a title winning side together with a televised FA Cup Tie was great, but at the end of the season I was surplus to requirements and I had no hesitation in linking up with the Gaffer and coming back to Tonbridge.  I have no regrets about it but all the players and the management team has now changed at Maidstone and for me it’s just another club.”

There were a number of other interesting observations and amusing anecdotes along with a few pints drunk, and the evening concluded at around 9:30pm.