What did the Romans ever do for us? 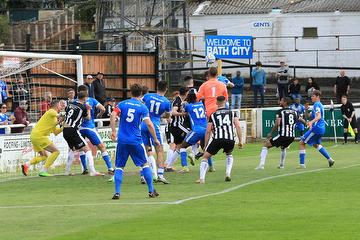 Certainly not provide the point Angels need for mathematical safety

It was another frustrating afternoon for the 75 Angels supporters who made the trip to Somerset to watch their teams’s penultimate away game of the season and hoping they would gain that one point to guarantee mathematical safety in the National League South relegation battle.

It was a case of history repeating itself with the previous Saturday with Angels conceding an early goal, the only goal, and not being able to restore parity let alone take a lead.

In the 7th minute Tom Smith, City’s best player, executed a peach of a pass to set up Alex Fletcher who made no mistake in placing the ball neatly out of Jonny Henly’s reach.  It was a great strike, but where was the Angels defence?

Bath continued to largely hold the upper hand without creating any genuine chances but there was something of a response from the visitors who after a period of dominance the loose ball fell to James Taylor whose first time effort was straight at Ryan Clarke in the City goal.

The wing play of Aaron Smith-Joseph and Ricky Modeste was at times exciting to watch but too often the final delivery lacked the class to over worry the hosts defence.

As half time approached Joe Turner with a great run off the ball was put through but his attempted lob landed safely in the hands of Clarke.

Straight after the break Bath nearly doubled their advantage when a fine cross from the left should have been tapped home but the ball rolled harmlessly across the goal area.

One of the reasons why Tonbridge can feel reasonably safe from the drop is the meanness of the defence with, for the position they are in, results in a decent goal difference.  We saw an example of why this is when Henly was required make a superb double save in the 57th minute.

Seven minutes later after some good work by the Angels attack the ball once again fell to James Taylor lurking with intent on the edge of the area and who unleashed a terrific shot that pulled out a great save from Clarke.  It was perhaps a defining moment in the game.

Tonbridge continued to huff and puff but so often the final effort lacked the quality needed at this level of football and while there is always hope that a mistake might be made and there was a sense the game would peter out with no further goals.

Tom Beere in the 90th minute with blue shirts pouring forward saw his effort go just wide but it was that sort of afternoon for the Kent side who still don’t have that one point to ensure mathematical safety.  The superior goal difference they have compared with Welling United and Billericay Town will surely see them through but how the supporters and Steve McKimm must wish for a more definitive ending to the season.  Bring on Eastbourne Borough on Bank Holiday afternoon for the final game on the Longmead turf.