Win and a loss at Bromley 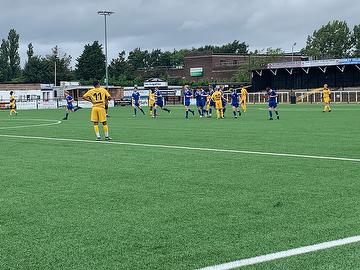 Tommy Parkinson mixed his squad into two teams for a double header against Bromley at Hayes Lane resulting in the Angels’ Academy winning the first game but being comprehensively beaten by a much stronger Bromley since in the second.

In the opening game, Luke Taylor, on his 17th birthday, scored twice in the opening 10 minutes as the Angels took charge of the game.

The home side slowly grew into the game but Tonbridge looked far the most dangerous throughout the half.

The second half began with a stunning goal to put the Angels three in front. The ball was well worked from the right before being crossed for Brynley Ruck to score with a stunning volley into the top corner.

Bromley reacted well to the setback and scored with a well worked goal of their own but Tonbridge easily contained them to see the game out.

The second game saw a much stronger Bromley side, based on second and third year students whilst the Angels fielded half-a-dozen first years and a couple of trialists and it showed from the first whistle.

Within the first five minutes, Bromley went close with a shot narrowly wide and also saw a shot strike the crossbar.

The home side went ahead on 13 minutes when the same lad that had hit the crossbar converted when he turned home a cross from the right at the near post.

The Angels’ Academy mounted a response and Ben Twist was unlucky to see his effort go narrowly wide followed by a trio of corner that were eventually cleared to safety. The home side reasserted themselves and goalkeeper Charlie Martin kept the Angels in the game with some good saves before the break.

A very well-worked goal gave Bromley a 2-0 lead within four minutes of the restart and the game was one-way traffic for the period up to the hour mark when Twist brought a good save out of the home goalkeeper who also saved the rebound from Harry Kempton.

Two goals in three minutes wrapped up the game for Bromley when, after 72 minutes, the centre half hooked home a corner and, despite a fine save from substitute goalkeeper Nat Gibb, his parry was stabbed home.

Manager Parkinson reflected after the game that they had been beaten by a very strong Bromley team but there were plenty of lessons learnt for a team of mainly first year students.