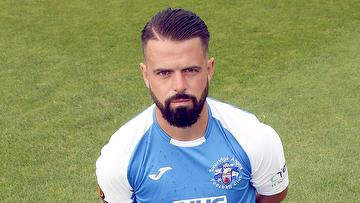 Ben Greenhalgh (27) joined the Angels from fellow National South club Dartford on an initial one month’s loan in November 2019, a move that was made permanent the following January.

Ben should need little introduction to keen followers of the Non-League scene in the South East. It was however the warmer climes of Italy where his adult career started following his win in Sky 1’s ‘Football’s Next Star’ which earned him a a dream move to Inter Milan and a loan to Como where he regularly appeared on the scoresheet.

His return to the UK saw him link up with Ebbsfleet United, Maidstone United, Concord Rangers, and then to Scotland with Inverness Caledonian Thistle, and Stenhousemuir before returning to England with a period spent at Hemel Hempstead Town before joining Dartford in 2018.