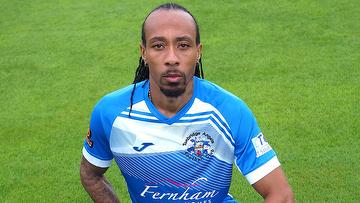 A pedigree non-league player as well as a Grenadian international, Ricky played in youth sides at Charlton Athletic, Arsenal, and Rushden & Diamonds, before graduating to men’s football initially at Chelmsford City and more recently Billericay Town. However, it was to be at Dover Athletic where, so far, he has arguably enjoyed the best years of his career. In two spells at Crabble he amassed around 200 appearances with over 30 goals. He will be fondly remembered by Whites supporters for scoring twice in the 2013/14 Conference South play off semi-final win against Sutton United and then setting up Nathan Elder for a winner against Ebbsfleet United in the final.

His international career has seen him turn out for Grenada on 8 occasions scoring twice for The Spice Boys.