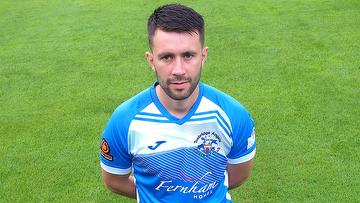 Our longest continuously serving 1st team player, Tom joined from Leatherhead in June 2014 with other previous clubs listed as Maidstone United and Ramsgate. Usually employed in the heart of midfield but equally capable of performing in central defence, he has an appetite for scoring goals from open play or at set pieces. Runner up three years in succession in the Supporters Player of the Year competition demonstrates ‘Parky’s’ consistently high performances in which he lets his playing do the talking. Deservedly appointed 1st team captain in 2016/17 but unfortunately suffered two serious leg injuries which put him put of action for long periods and as a result sportingly handed the captain's armband to Sonny Miles. His playing come back was rewarded with his first National South appearances and goals in 2020/21. Manager of the successful Angels Academy teams. Was appointed Player Assistant Manager under Manager Jay Saunders in May 2022