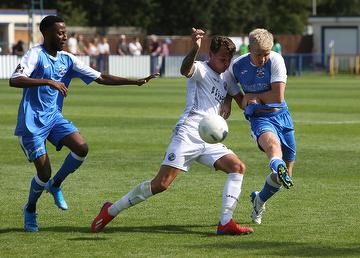 This fixture was always going to be a severe test of the Angels credentials with Havant & Waterlooville one of the favourites for promotion.  Add in the fact that their newly installed manager, Paul Doswell comes with a fine reputation following what he achieved at his previous club Sutton Utd where he gave Steve McKimm his first coaching position and you have the ingredients for an enticing encounter.

Angels got off to the best possible start with a goal after just four minutes when Tommie Hession-Harris took advantage of a slip in the Havant defence  scoring from close range.  Ironically perhaps the goal came too early for the home side as it seemed to galvanise the visitors and they started to go through the gears and 14 minutes later they were in front.

On 8 minutes the potent Havant attack cut through the Tonbridge defence with Jonah Aylinga getting the decisive touch and then on 18 minutes a wonderful free kick from Nicky Bailey that no goalkeeper was ever going to save left Tonbridge reeling.  To their credit the Angels steadied the ship and created chances for themselves with Tom Derry unlucky a couple of times and Alex Bentley hitting the base of the post with a 30yd drive in the 23rd minute.

Just when it looked as if the home side would get to half time just the one goal in arrears, Havant stepped up and following a passage of play during which the home side couldn’t clear their lines, Andy Drury on 45 minutes applied the finishing touch to a strike which was to give the Angels a mountain to climb.

The home side enjoyed more possession than their opponents in the second half and it seemed that Havant were largely content to sit on their lead and just play on the break.  Man of the Match for Tonbridge, D’Sean Theobalds on 71 minutes went on a run through the Havant defence and forced a fine save out of Ville keeper Ross Worner while two minutes later at the other end Havant’s Man of the Match Andy Drury brought Roberts into action diverting an effort round the post.

On 82 minutes a Sonny Miles header drifted just wide of the right hand post and on 87 minutes Joe Turner’s fine shot looked goalbound but somehow clipped the inside of a post and ricocheted along the goal line and to eventual safety.  It was that kind of afternoon for Tonbridge.

Afterwards Steve McKimm Angels Boss said: “I’m very proud of the effort my players put in today against a very good Havant side. We’ve created chances and our heads have never gone down.  We just need to convert some of those chances.”