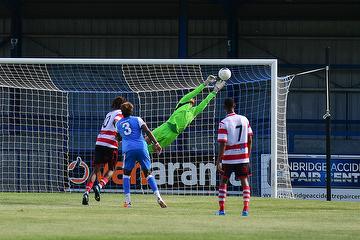 There was not much to choose between the two sides in the first period with K’s short passing game contrasting  with the Angels more direct approach but in effect managing to cancel each other out.

After a quarter of an hour there was within the space of a minute, Tonbridge chances for Tom Derry and Jason Williams while at the other end K’s no 7 hit a powerful low shot just wide of the left hand post

The game came to life after 37 minutes when Kingstonian no 7 again involved was brought down when through by Kristian Campbell. K’s no 9 hit the free kick well enough but it was brilliantly pushed by Joe Tupper on to the upright with Jack Parter able to tidy up.

Two minutes later Angels Tom Derry was impeded as he approached the Kingstonian penalty area. The free kick by Khale Da Costa was just wide of the right hand post.

On 44 minutes Angels took the lead following a glorious pass by Tom Beere putting in Jason Williams who was left with the task of converting which he achieved at the second attempt.

The second half saw Kingstonian take control of affairs with chances falling for no 11 and another chance forcing a decent save from Tupper.  Eventually the visitors got the goal they deserved when no 12 headed home following a sustained attack on 74 minutes.

They should have taken the lead on 84 minutes when they contrived to miss an open goal when it had seemed easier to score.

The game ended with the home side starting to look the stronger. On 87 minutes Joe Turner had a chance but the Angels winger couldn’t get the ball under control but finally the home side claimed the winner through Ben Greenhalgh.  The midfielder struck the ball home cleanly on 89 minutes after good work by Turner.

Afterwards Steve McKimm said: “Pleased to get the result and once again there were things we did well and things we still have to work on.  Kingstonian gave us a very good game and we thank them for that”